A Shocking and Offensive Death (pt.4) — The CIRCLE OF WOMEN

Posted on April 21, 2013 by lettingthetextspeak

33 At the sixth hour darkness came over the whole land until the ninth hour. 34 And at the ninth hour Jesus cried out in a loud voice, “Eloi, Eloi, lama sabachthani?”–which means, “My God, my God, why have you forsaken me?” 35 When some of those standing near heard this, they said, “Listen, he’s calling Elijah.” 36 One man ran, filled a sponge with wine vinegar, put it on a stick, and offered it to Jesus to drink. “Now leave him alone. Let’s see if Elijah comes to take him down,” he said. 37 With a loud cry, Jesus breathed his last. 38 The curtain of the temple was torn in two from top to bottom. 39 And when the centurion, who stood there in front of Jesus, heard his cry and saw how he died, he said, “Surely this man was the Son of God!” 40 Some women were watching from a distance. Among them were Mary Magdalene, Mary the mother of James the younger and of Joses, and Salome. 41 In Galilee these women had followed him and cared for his needs. Many other women who had come up with him to Jerusalem were also there.

In a time, place, and culture(s) where women were genuinely viewed as inferior and secondary, and where their testimony was not even admissible in court, the gospels are truly counter-cultural; not simply in ideology, but in practice.  To base the perceived credibility of the authenticity of the post-death and resurrection accounts of Jesus on the testimony of women is nothing short of shocking and offensive; almost absurd.  Nobody in their right mind would have written this detail into these accounts unless, of course, it was completely true. 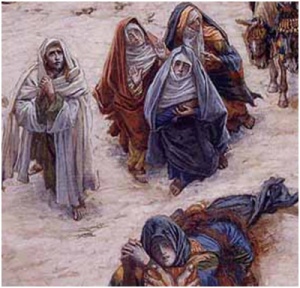 This begs the question why would Mark (as the scribe/amanuensis under the watchful eye of Apostle Peter) highlight this circle of women as primary witnesses?

Even today there exists significant gender discrimination towards females within Middle-Eastern cultures, and back then the testimony of women wouldn’t even stand up in court.  So why not be more protective of the precarious fledgling church, and write about the men in the crowd instead?

The only possible answer is that perhaps it is because these events were exactly what took place on that day, that Good Friday, and also that there was something about the liberating kingdom of God which would become evident in the retelling of the story highlighted and focused that way.  Women are no longer secondary but are instead liberated by the Lord Jesus into full equality in the kingdom of God.

Jesus Christ is the great liberator.

What we discovered in the previous episode of this devotional series (regarding the Centurion) was that Jesus levels the playing fields in terms of socio-economic, racial, and cultural backgrounds (and so on); but the good news does not stop there.  It’s not just Jesus’ inclusivity as opposed to the exclusivity of the religious and political cultures back then, but it’s about the true liberation of all people within the construct of following Christ as King and Lord.

The gospels are replete with stories showcasing that the group of disciples that followed Jesus included women.  And though they differed in gender, they followed and were accepted even to the point of holding important roles within his group of followers. Verse 41 says that these women “…had followed him and cared for his needs”.  The English word “followed” is translated from the Greek akoloutheo meaning one who “joins as a disciple”.

The phrase “cared for his needs”, which is also translated “ministered to him” comes from the Greek word diakoneo where we get our word “deacon”.  These women were more than secondary servants to Jesus.  They weren’t just doing dishes and watching babies in the background; this circle of women were full disciples that participated in diaconal ministry in a time and place where this was absolutely taboo.

Jesus Christ is the great liberator.

What we learn from these gospel accounts, as well as from the epistles, is that Jesus frees people up from culturally-determined limits and bondage to human rules, roles, and expectations.  This was very true for the circle of women who stood “at a distance” with the other disciples that Good Friday on that hill at Calvary.  And a few days later, it was some from that same circle of women who were first on the scene to witness the empty tomb and the newly resurrected Lord Jesus.  Those women were the ones who reported to the other disciples (including the future apostles who would go on in power to spread the good news across multiple continents).  This circle of women was integral to the account.

Stepping back to summarize this four part devotional series, it’s important to review that these narratives would have come across as shocking and offensive; almost the direct opposite of what would have been expected. The gospel writers, these first century biographers, include and even highlight aspects of the story (the CRY, the torn CURTAIN, the CENTURION, and the CIRCLE OF WOMEN) which would make sense strategically only if these accounts are reliable and true.

Otherwise, if these accounts were fabricated we would expect Jesus’ crying out in the Garden to be heroic not weak; the Temple elevated in importance not torn asunder; a Temple leader ascribing divinity to Jesus but certainly not a Roman guard; and by all means the primary witnesses to the final death and resurrection accounts would have be trustworthy male religious leaders instead women!  But instead the Gospel writers apparently reported simply what happened, come what may.

All four of these elements could have been counter-productive in reaching the culture with the message of Jesus, but they weren’t; quite the contrary took place.  In spite of enormous odds (including the martyrdom and torture of the faithful), this new fledgling fragile church grew and expanded beyond the borders to become a large force in the world and a testimony to the divinity, love, and grace of Jesus; by the power of the Holy Spirit.  It was truly good news: The best news ever.

Jesus, the liberator. Our Savior, Lord, and King.