Posted on January 12, 2013 by lettingthetextspeak

Jeremiah 33:14-17   ‘The days are coming,’ declares the LORD, ‘when I will fulfill the gracious promise I made to the house of Israel and to the house of Judah.  ” ‘In those days and at that time I will make a righteous Branch sprout from David’s line; he will do what is just and right in the land. In those days Judah will be saved and Jerusalem will live in safety.This is the name by which it will be called: The LORD Our Righteousness.’ For this is what the LORD says: ‘David will never fail to have a man to sit on the throne of the house of Israel

Our family vacationed in Yellowstone National Park sometime soon after the big fire of ’88. This was the fire, or rather the cluster of many fires, that was caused by the perfect storm of drought, wind, and heat.  Official reports list that about 1.2 million acres were scorched and 793,000 (about 36%) of the park’s total 2,221,800 acres were completely burned. Driving around, it all appeared surreal like a dead-zone or a moonscape with no ecosystem to speak of. No plants, no animals, just mile after mile of blackened stumps and (what appeared to be) scorched dead earth.

For Yellowstone to bounce back seemed insurmountable at the time, but our God is a God who is able to, and very pleased to, bring beautiful life out of ashes, scorched earth, and deadness. He brings the dead to life.

Many centuries before the coming of Christ, the Old Testament Jeremiah prophecied that the coming Messiah would be born through the lineage of David, the son of Jesse.

At first glance, that seems impressive.  After all, wasn’t David a King and one known as a “man after God’s own heart”?  But we need to dig deeper in order to find the depth of the riches of grace embedded into this genealogical statement.

The dark backstory of the human lineage of Christ includes overt and dark sin; actions seen in those (listed for instance in the Matthew 1 lineage) such as the prostitute Rahab, the adulteress Bathsheba, and even the victim Tamar (who was raped incestuously).  And lest we forget, even the most admired saints of the Bible had a very dark sinful side:  Let’s recall Abraham, the liar (saying Sarah was his sister to save his skin),  Jacob, the conniving manipulator (stealing his brother’s birthright), David, the adulterer and accessory to murder, Rehoboam, the oppressor and violent force against his own people, and so on.  Plus all the numerous polygamists living self-serving lives contrary to God’s clear mandate for marriage (one man, one woman, for life).

So let’s stop and consider this:  How amazing is this lineage that our Lord has been born into?  More importantly, how astounding that our perfect savior Jesus would choose to self-identify with the human family of sinners which includes the scorched earth of all these prostitutes, outsiders, power-hungry oppressors, adulterers and even murderers.  He could have done it another way but instead chose THAT way; the beauty of restoration and grace. 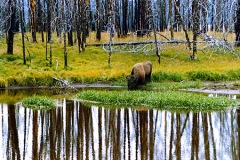 Back to Yellowstone: About 12 years after that devastating fire of ’88, our family once again traveled to Yellowstone to visit.  Within a mere decade, you would not believe the change. The new life was everywhere.  The lush landscape was green and thriving, the park animals (buffalo, deer, moose, elk) were roaming everywhere, and the new growth was becoming mature.  The park had been reborn! A glorious restoration of grace.

While we wait during the season of Advent with great expectation and joy for our Savior Jesus to come (past, present, and future), may we see the clear and overpowering tone of grace of this message.  Within the framework of our human lineage of brokenness and sin, our God-man Jesus broke through to bring healing, redemption, and new life.

Where it had been charred, dry, and appeared dead… now green, lush, life.