The Presentation of Jesus in the Temple

Posted on February 2, 2013 by lettingthetextspeak

The Presentation of Jesus in the Temple

Luke 2:22 When the time of their purification according to the Law of Moses had been completed, Joseph and Mary took him to Jerusalem to present him to the Lord 23 (as it is written in the Law of the Lord, “Every firstborn male is to be consecrated to the Lord”), 24 and to offer a sacrifice in keeping with what is said in the Law of the Lord: “a pair of doves or two young pigeons.” 25 Now there was a man in Jerusalem called Simeon, who was righteous and devout. He was waiting for the consolation of Israel, and the Holy Spirit was upon him. 26 It had been revealed to him by the Holy Spirit that he would not die before he had seen the Lord’s Christ. 27 Moved by the Spirit, he went into the temple courts. When the parents brought in the child Jesus to do for him what the custom of the Law required, 28 Simeon took him in his arms and praised God, saying: 29″Sovereign Lord, as you have promised, you now dismiss your servant in peace. 30 For my eyes have seen your salvation, 31 which you have prepared in the sight of all people, 32 a light for revelation to the Gentiles and for glory to your people Israel.” 33 The child’s father and mother marveled at what was said about him. 34 Then Simeon blessed them and said to Mary, his mother: “This child is destined to cause the falling and rising of many in Israel, and to be a sign that will be spoken against, 35 so that the thoughts of many hearts will be revealed. And a sword will pierce your own soul too.” 36 There was also a prophetess, Anna, the daughter of Phanuel, of the tribe of Asher. She was very old; she had lived with her husband seven years after her marriage, 37 and then was a widow until she was eighty-four. She never left the temple but worshiped night and day, fasting and praying. 38 Coming up to them at that very moment, she gave thanks to God and spoke about the child to all who were looking forward to the redemption of Jerusalem. 39 When Joseph and Mary had done everything required by the Law of the Lord, they returned to Galilee to their own town of Nazareth. 40 And the child grew and became strong; he was filled with wisdom, and the grace of God was upon him.

Rather than digging underneath the surface of this multi-faceted passage, scratching through subsequent layers of rich mineral deposits hunting for precious textual gems, instead let’s soar above at altitude and take the bird’s-eye view gazing down upon some of the big major themes that define our Lord Jesus. There are many here present in this illuminating text.

The HUMANITY of Jesus Christ.
When the time had come, according to Levitical law, for the purification of Mary (40th day after giving birth) and for the Presentation of Jesus (as firstborn son), the young family traveled to Jerusalem to visit the temple.  This was what was expected, so this is what was done.  Jesus, embracing the fullness of his human nature, participated in our human experience; including this childhood religious event.

Theologically speaking, God the Son, Jesus Christ, emptied himself (“kenosis” passage Phil 2:7) of the full rights and benefits he had enjoyed for all eternity past and he willingly and joyfully came into our world to fully identify with us in our humanity.  While maintaining his full divinity, he also took upon himself our full humanity; yet without sin (Heb 4:15).  Jesus Christ: fully divine and fully human. Exactly what we needed.

The POVERTY of Jesus Christ.
In the act of taking upon himself our full humanity at this particular place and time, our Lord Jesus chose to be born into one of the most disadvantaged and underprivileged living conditions imaginable.  God’s angel Gabriel wasn’t sent to the wife of a king, a rich successful businessman, or a renowned Sanhedrin religious leader.  Instead, he visited Mary; and in doing so, set wheels in motion that Jesus would be born to (and raised by) these very young, insignificant, unknown, and disadvantaged human parents living in poverty.

That Mary and Joseph had to present two small doves as their sacrificial offering (vs. 24) speaks volumes to their abject poverty (Lev 12:8).

Consider the extreme shift taking place here: Jesus Christ has transitioned from ultimate King and ruler of the universe into a lowly, needy, helpless, poverty-stricken little baby.  This is how much our Lord loves and adores us; not just being willing to, but actually fully identifying with our poverty, with our need, with our helplessness.

The RIGHTEOUSNESS of Jesus Christ.
In context of being born in human form to a poor Jewish family, God the Son came quietly into our world to accomplish the most important task imaginable: He was to live the perfect human life (without sin) and to completely fulfill the Old Testament covenantal law (vs 22) in such a way that fallen mankind could be redeemed.  In order for this to occur, Jesus was to manifest God’s righteousness in every way.  We recognize, in retrospect, a very early form of this here at the Presentation, and then years later at the baptism of Jesus in a more obvious way.

When Simeon took the baby Jesus into his arms (vs28), he proclaimed the glory of God packaged in that swaddling-cloth bundled baby. In verses 30-32 we read the Nunc Dimittis where Simeon, being filled with the Holy Spirit, telescopes the past, present, and future in announcing that his “eyes have seen God’s salvation” and that Jesus is indeed the embodiment of God’s doxa glory to Israel (and to ALL the nations).  The Righteous One they had been waiting on so desperately, that the prophets had foretold would someday come, had indeed come in the flesh.

As the Apostle Paul puts it, in his letter to the Galatian churches, “But when the time had fully come, God sent his Son, born of a woman, born under law, to redeem those under law, that we might receive the full rights of sons.” (Gal 4:4-5).

The REMNANT of Jesus Christ.
Yet another big-picture theme observable in this Presentation text is that of the ever-present “remnant”.  In each age, place, and culture, God has faithful devotees who worship the Lord and wait expectantly for redemption.  Even in the most extremely depraved cultures and societies, when it seems even the Christian church is off the rails, there are always some who continue on as a remnant of faithfulness: Waiting for God’s perfectly appointed time for the fulfillment of redemption to come.

Consider the obvious Old Testament story of Noah building the ark amongst his extremely violence-plagued population (Gen 7).  And Joseph who retrospectively comprehends that his persecutions and problems came about in order that he would become the remnant (Gen 45:7). And consider the destruction of the quintessentially sexually immoral towns of Sodom and Gomorrah (Gen 19).  And ponder the faithful remnant both staying and going in captivity to Assyria and Babylon (Kings and Chronicles).  And what about each of the prophets, speaking often to unbelieving faithless religiousness?

It seems that each hallmark story of the Old Testament highlights a devoted remnant that provides an ongoing thread of faithfulness that continues onward through history toward the birth, life, death, and resurrection of Jesus Christ. 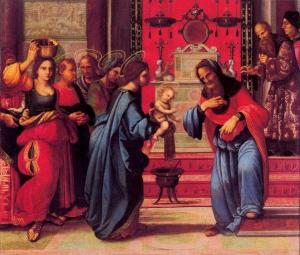 In this Presentation passage, we read of two such faithful followers: Simeon and Anna.  Simeon in vs 25 is described as “righteous and devout” and that the “Holy Spirit was upon him”.  Though we don’t know much more about this man, the text doesn’t tell us whether he was old or young (many believe him to be old because he says he’s ready to die upon seeing God’s salvation embodied, vs.29, but that’s conjecture) or whether he was a priestly leader or simply a faithful man worshiping in the temple courts.  What we do know, however, is that in a religious society that ultimately rejected God’s savior Jesus Christ, this man Simeon was one who recognized his glory and necessity.  Anna, the text tells us, was indeed old and her ancestry is listed.  Luke also describes that she was known to be always at the temple, worshiping day and night, fasting and praying.

But the point of the remnant isn’t the promotion or glorification of these individual people.  Not at all.  Instead, it’s the promotion and glorification of God who provides remnants to keep his redemptive plan going forward.  The intention is that the faithful remnant ultimately point towards the only truly faithful one; our Lord Jesus.

The DELIVERANCE by Jesus Christ.
Ultimately what Simeon and Anna, and all “remnants”, were waiting on was the promised deliverance that would come at God’s perfect appointed time.  The deliverance and rescue from sin, from evil, and the overall brokenness of fallen creation. Waiting for redemption.

Luke is very specific; he uses the Greek word “lutrosis” (vs.38) which is translated as redemption, a ransoming deliverance, especially from the penalty of sin.  This term only appears three times in the New Testament, being used twice by Luke and then also used once by the author of Hebrews who writes “and not through the blood of goats and calves, but through His own blood, He entered the holy place once for all, having obtained eternal redemption” (Heb 9:12).

This rescue provided by Jesus would come at a cost, however, and we get a glimpse in the prophetic words of Simeon to Mary in vs.34-35: “This child is destined to cause the falling and rising of many in Israel, and to be a sign that will be spoken against, so that the thoughts of many hearts will be revealed. And a sword will pierce your own soul too.”  This counter-cultural redeemer would definitely bring deliverance, but NOT in the ways most would expect.  The masses wanted socio-political revolution, but the redeemer Jesus would bring rescue in a wholly different way: Not through strength, but through weakness.  Not through winning, but through dying.  Dying on the cross.

And in doing so, Jesus would illuminate the hearts of all nations as he truly was the “light for revelation to the Gentiles” proclaimed by Simeon that day.

So in this passage that the Church calls the “Presentation of Jesus at the Temple”, those are some of the major themes that direct our understanding of the person, nature, and salvific work of our Lord Jesus Christ.

One thought on “The Presentation of Jesus in the Temple”